Passengers passing through Bucharest Henri Coanda International Airport have the opportunity to admire, starting with Thursday, May 20, 2021, at the Art Safari Airport Museum, some of the most appreciated and well-rated works of the Romanian painter Nicolae Grigorescu: "Peasant with a white headscarf", "En plein soleil", "Autumn on Doftana Valley", "Rocks in the Fontainebleau forest", "Landscape at Campina", "Bivouac in the Danube Plain”, “The War of Independence", "Peasant with red beads", "Portrait of a noblewoman", "Static nature with red apples", "Peasant at the fountain", all from private collections.

The exhibition marks 183 years since the birth of the creator of modern Romanian painting and brings together emblematic paintings from Grigorescu's work. The value of the exhibited works is about one million Euros, which makes the Art Safari Airport Museum the most valuable museum in an airport in Europe. "Peasant with a white headscarf" reached, in 2018, the absolute record of the Romanian art market and was sold at an auction with the amount of 340,000 Euros. In fact, Nicolae Grigorescu is the leader in the top of the best-selling artists at auctions in Romania in 2017, with total sales of 726,193 Euros for 18 paintings sold.

The exhibition opening was attended by the Minister of Culture, Mr. Bogdan Gheorghiu, as well as officials from the Presidential Administration, the Ministry of Transports, the Museum of Bucharest, representatives of Bucharest Airports National Company and Art Safari.

The phrase "Henri Coandă Airport - the main gateway to the country" is already well known, but this time, the airport becomes a gateway to culture, to essential symbols for our identity. We want the passengers to stay with this memory about Romania and to carry this artistic imprint in their souls. We are honored to host this exhibition that promotes Romanian art", said Cosmin Cătălin Peșteșan, General Manager of Bucharest Airports National Company,

Airport Museum was born this year in March at the joint initiative of Art Safari and Bucharest Airports National Company and it represents a cultural project promoting the Romanian national identity in an airport space with international opening. 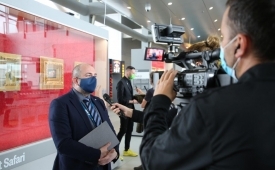 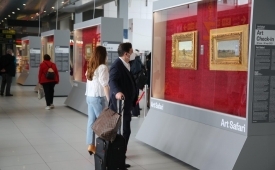 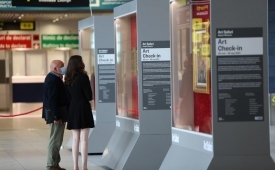 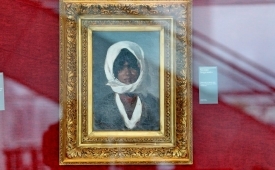 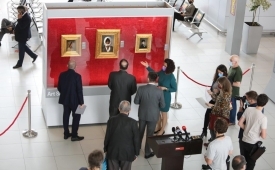 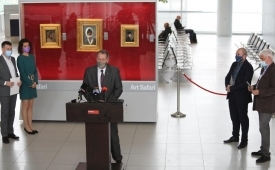