British Council organized in April 2016 a flash mob in the Bucharest Henri Coandă International Airport to mark 400 years since the death of the greatest British writer, William Shakespeare.

The stars of the flash mob were the ‘George Enescu’ National College of Music orchestra, conducted by Gheorghe Iliuță and a group of junior dancers trained by choreographer Cristina Ionescu. They performed passages from William Byrd, Frederic Handel, Jeremiah Clarke and Lord of the Dance. During the three weeks of preparation for this flash mob, the young players and dancers had the opportunity to learn more about Shakespeare's work and life, but also about the music and the dancing from his times.  The event was organized in partnership with the British Embassy and it has been delivered with the support of the Bucharest Airports National Company. 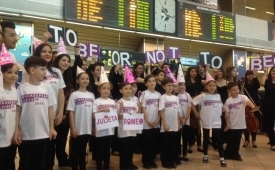 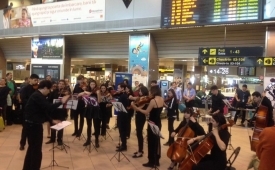